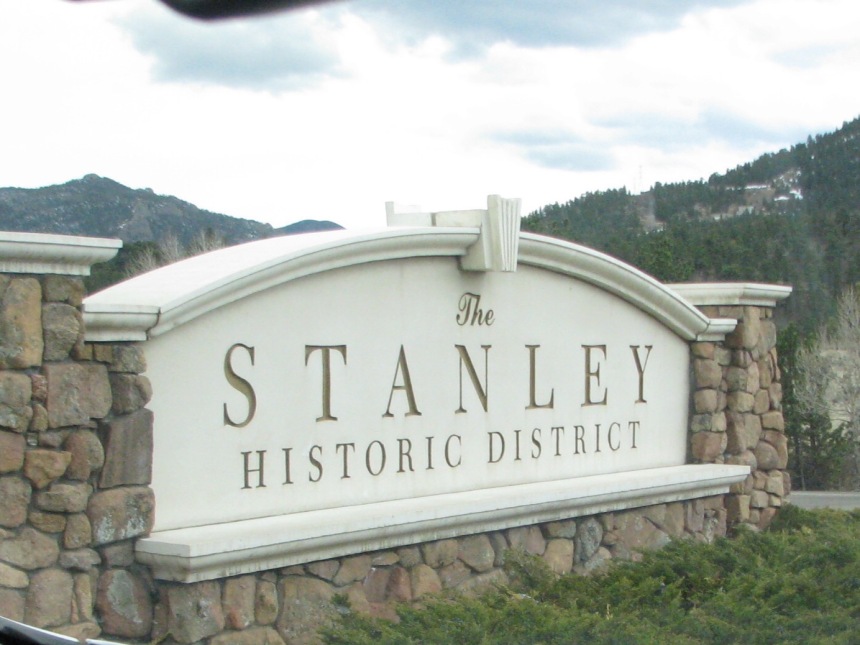 K and I went to the meeting room downstairs to meet our tour guide. There were approximately 15 of us in our group. The guide started with the history of The Stanley then guided us out the side door, and walked us down to the concert hall.

The concert hall was beautiful inside and I did not really pick up on any energies on the main floor. Then we followed the guide down stairs. The stair well was different. It is located underneath the two corner windows in the picture above. So as you are going down the stairs, those windows are high above you and the walls are all plain white. As I am walking down the stairs, I could feel the energy change, and the shift causes me to feel a little anxious.

As we entered the bottom room, you could see it was full of pianos. Mrs. Stanley loved and collected pianos. In the picture, the piano room is all the little small windows at the bottom of the structure. Down there I still was feeling anxious and the energy was increasing. My hands were shaking and I felt like I just wanted to get out of there.

When we left the building, I separated from the group and took the picture above. Was I shocked later when I really examined the picture. I knew I felt something in there, but I couldn’t believe I got it on film. Also, we were the last tour of the day, so the guide put a big padlock on the doors after we all were out front, and the building was empty.

First, these pictures below are of Mr. & Mrs. Stanley: 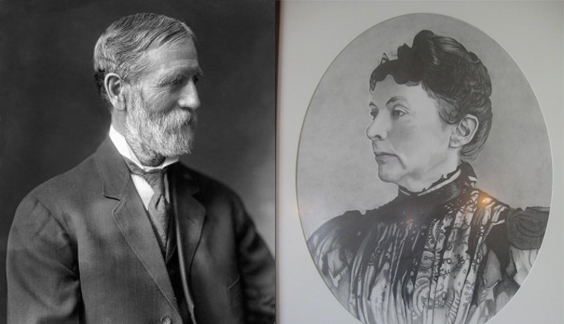 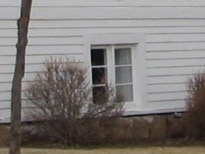 We then took the grand stairs up to the second floor. The floor where room 217 is. Our guide tells us more history and more ghost stories. The myth is that The Stanley is on top of a portal and that is why they get so many different ghost claims. The only consistent claim is the woman who haunts room 217. Also, on the upper floor, you can hear children running through the halls.

The tour was going smoothly, and I was feeling relieved that I hadn’t had any spirits trying to make it difficult for me….. That all changed on the fourth floor.

The fourth floor used to be where the governesses took care of all the children while their parents were having dinner and going to parties at the hotel. That is where people claim to hear children running up and down the hallways. In the hallway there is a set of stairs that go up to an attic, and at the top of the stairs, the door is locked shut. That is where there used to be a large play area for the children. It is dark at the top of those stairs and someone painted the word, “REDRUM” on it in red paint.

We all lined up to get a picture of the door. As I am in line I start getting anxious. I have static electricity chills all over my body. I also feel like I am going to get sick. As I am getting to the front of the line, I am becoming really uncomfortable. Now I am next, and the lady in front of me walks up the steps and snaps her picture of the door. I then start hearing what sounds like children whispering, but I can’t make out what they are saying. When the woman in front of me is done, she steps to the bottom of the stairs and all of a sudden the whispering stops and there are three loud knocks on the door above us. She stops and looks at me in pure terror and says, “Did you hear that?” I said, “Yep.” So I pointed my camera at the door and it wouldn’t take a picture. I was trying to capture all this on camera, but my camera was dead. Then all of a sudden the most intense wind of static electricity came from the door, right through me, and filled the entire hallway. Everyone on the tour could feel it and as I looked at them, I could see their hair on their heads lifting up from the static.

Of course this caused a lot of commotion. Even the tour guide was freaked out. The lady that was next to me on the stairs looks at me and then says to everyone, “this happened the moment this woman stepped on the bottom stair.” She didn’t say it mean, she was just trying to help get to the bottom of what just happened. Then my friend K says, “Its her, she is a sensitive, things like this happen around her all the time.” Now everyone is looking at me.

Thank goodness we had a cool group of people. They were so excited! They started asking a million questions, then asked the tour guide if I could lead the tour with her. The tour guide was even more excited and loved the idea. I knew the tour wasn’t that much longer so I said that I would love to co-pilot the tour. Oh, before I forget… I never got a picture of the door with “REDRUM” on it. The picture above I got from the internet.

The tour ended down where we all met up originally. When we got down there, the tour guide took us to this little alcove that looks like you are in a rock cave. The rock is all limestone, which a huge conductor for paranormal activity. In this alcove is where they think the portal is, that ghosts come and go out of. I felt nothing down there.

Our tour ended after that. Some of the people that were on the tour circled around me and asked me more questions. I love that. I love that people are open to the paranormal and they want to learn more. I even got asked to come and investigate in their home towns.

I do have another picture of what else I caught on camera. Earlier in my story I told you I took pictures of everything in the lobby. And I explained how the tour guide said that there is a portal in the limestone alcove. Well, in the lobby right above that alcove is one of the large fireplaces.  After down loading all my pictures, I zoomed in on this particular one, because I thought I saw something odd.

Do you see the faces? I only saw two at first, but I had this picture analyzed buy other investigators and they all see 5 faces. One is upside down. This picture possibly supports that there is a portal under The Stanley. Now I really want to go back and stay there. And for the ultimate experience, I want to stay in room 217. The waiting list for is long, but I know it will be worth the wait.